It's hard to believe that we last updated this blog over two years ago!

During that time, Drew's mom and I have continued to get private messages and see comments come through on various posts and videos, some of which are now 10 years old. Most of the communication is positive and we continue to be grateful that readers find the material on the blog valuable.

Because you've asked, here is what Drew (now age 10) is up to these days. 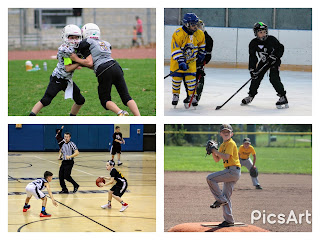 Miscellaneous
Here is a video of his first piano recital:

What else do you want to know?

It's hard to believe that Drew is now half way through the second grade. His interests still remain entrenched in sports; he has added a love for playing ice hockey to his already long list of football, basketball, baseball and lacrosse. It continues to amaze me how his deafness doesn't hold him back from anything he wishes to do, and anymore, we only have minor adjustments or accommodations in order for him to participate fully.

Drew has found that wearing a skull cap works well when playing any sport with a helmet, particularly ice hockey. And he now enjoys wearing sweat bands, similar to what LeBron James wears, to keep his coils in place while playing football and basketball. He is active, healthy and happy, which makes us very blessed.

We are coming up on the three year re-evaluation of Drew's IEP. With that comes new assessments, which I thought I would share, primarily for those that are new to the world of deafness and cochlear implants.

On the CELF-5, Drew scored above average on the word structure (measures the ability to (a) apply word structure rules to mark inflections derivations, and comparisons; and (b) select and use appropriate pronouns to refer to people, objects and possessive relationships). He also scored above average on the formulated sentences tests (The test assess the ability to formulate complete, semantically and grammatically correct spoken sentences of increasing length and complexity.)

In addition, the CELF calculates a Core Language score, which measures a child's overall language performance, which helps determine the presence of a language disorder. Drew scored in the above average range.

The district also looked at Drew's Language Structure, which measures his use of receptive and expressive language to interpret and produce sentences. Drew scored in the above average range for children his age.

Yes, a child who is deaf, scored above average in language competencies and structures. Cochlear implants work. And they work well.

In addition, Drew was given several assessments from the KTEA-3. This test showed that Drew has very well developed skills in decoding and encoding written language as compared with peers his age. This means that his spelling was very well developed! For a hearing impaired child, this is remarkable. If you can't hear the sounds in the words, it's very difficult to spell.

The overall evaluation for reading reads: "Paired with the KTEA-3, results suggest reading skills in the areas of decoding, fluency and comprehension to be secure." According to Drew's classroom teacher, he is now reading at a mid-third grade level.

The school psychologist working with Drew told us in our meeting that we should treat Drew to a milkshake after school! (And we did!)

Honestly, none of these results surprise us. We see how remarkable Drew is daily. Early identification, early intervention, early implantation. They have all worked together to be where we are today.

Drew has always been a bit of a dare-devil, much more so than his sister. He loves roller coasters, and now that he is over 48" tall, he is finally able to ride some pretty intense rides. On a recent trip to Kings Island, Drew had his first experience with the maximum thrill rides.

On our past trips to Disney World, Kings Island and Cedar Point, we have simply used a critter clip to attach Drew's cochlear implants to his shirt. This way, if a processor did come off of his ear during a ride, it would be attached to his shirt. However, as the ride intensities increase, we're becoming increasingly worried about their safety during a roller coaster ride.

Drew had a lot of anxiety while riding Adventure Express, one of our first rides of the day, when a processor came off of his ear for the first time ever. He was screaming that he lost his ear, and became very upset at the thought of losing the processor. Following the ride, we were able to remind him that they are attached to his shirt, and we won't lose them. He was fine for the rest of the morning, even riding The Beast with his processors.

As our day went on, Drew worked up the courage to ride The Vortex. This roller coaster goes upside down seven times. Not only was I worried about the intensity of the ride for Drew, but I was worried that even a critter clip would not keep the processors safely attached to Drew. I discussed my concerns with Drew prior to the ride, and he decided that it would be best to take his processors off during the ride. So, Drew wore his processors during the wait for the coaster, chatting with friends and family. As he boarded the ride, we took his processors off and placed them safely in a secure place, and he rode the ride. He loved it! He was so happy and had so much fun. And the interesting thing is that he told us he enjoyed riding the roller coaster more because he wasn't wearing his processors. And that's what he chose to do the rest of the day. Each ride, as we would board an intense ride, we would remove his processers and secure them during the ride. He still wore them for things like bumper cars, swings and the scrambler. But for the coasters, he was perfectly content riding without sound.

It's amazing the difference a year makes - last year we spent our entire day in Planet Snoopy and this year we're doing seven-loop roller coasters. My kids are growing up way too fast!

Drew's favorite ride of the day: The Vortex 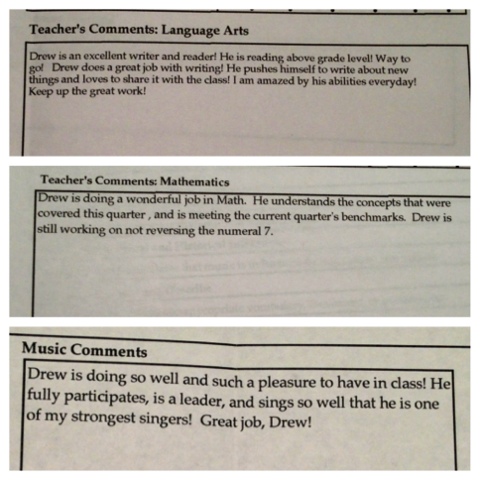 It's hard to believe, but Drew is half way through Kindergarten! He's enjoyed making new friends this year, but mostly I think he enjoys being at the same school as his sister.

Drew's progress this year has been amazing. Besides a slight issue of talking too much during circle time and missing vital instructions ("Drew can get silly/talkative during group and work time..."), he has matured quite a bit this year and had glowing remarks on his progress report.

The most amazing piece of his report is his development of Language Arts skills. His teacher wrote, "Drew is growing so much as a reader and writer! He always amazes me that he is strong in language arts with his degree of hearing loss." Drew is currently working above grade level in most Language Arts skills, including rhyming, sight words, letter identification, and so on.

I'm really wishing I could have back all of the hours I spent worrying about weather or not he would ever learn to read and write.

Our son Drew was born in September 2006 with profound hearing loss in both ears, which means he is deaf. His hearing loss was caused by Connexin 26.

This blog is a record of our efforts to "turn on" Drew's ears, and our daily adventures with our bionic boy, and his older sister.